Connecting coins on the Semantic Web

What is Linked Data?

Here is how the Linked Data community defines the concept: Linked Data is about using the Web to connect related data that wasn't previously linked, or using the Web to lower the barriers to linking data currently linked using other methods. More specifically, Wikipedia defines Linked Data as "a term used to describe a recommended best practice for exposing, sharing, and connecting pieces of data, information, and knowledge on the Semantic Web using URIs and RDF." Linked Data is what lies behind the Semantic World Wide Web.

By Linking different Data sets, whether they be collection catalogues, hoard databases, research projects such as die-studies or type corpora, or online sales, we make more information available more easily to more people in more contexts. We make research and discovery easier and we provide a public service. Many major organisations are now embracing these concepts, including the agencies that fund research. Therefore, there are powerful incentives for the numismatic community to develop a Linked Data approach to its working methods. In ancient numismatics we might think of this as Linked Ancient Numismatic Data, and talk of a new LANDscape of numismatic research and publication. But what does this mean in practice? What do we need to do to participate in the Semantic Web?

We are used to thinking of our data in ways that are familiar to us. That often means that we work in slightly different ways from one another: we may use different technical terms, and different languages. We may structure our data in different ways. And this is entirely proper, since we are, after all, humanists. But while we may embrace our human differences, in doing so, we make it difficult to exchange data between ourselves. We also make it extremely difficult for the machines that underlie our work - the computers that hold our databases and publish our work on the Web, to understand what we mean and connect our data automatically with that created by other humans. To circumvent this problem we need to find ways to build bridges between our different habits and languages. We need to improve our data and/or find ways to Link it. 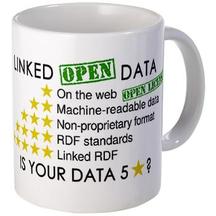 The Semantic Web, as envisaged by its founder, Sir Tim Berners Lee, provides for the Linking of Data in ways that are readable to both humans and machines. For this to happen successfully, we must follow four simple rules:

Best practice is thus to identify things by using a Universal Resource Identifier (URI).  Relationships between things may then be expressed using simple statements expressed in a Resource Description Framework (RDF).  Statements in RDF are made in three parts (subject, predicate and object), and are known as ‘triples’.  Ideally, each part of the triple will consist of a URI.

So, the basic statement:
Might be expressed as:
The use of URIs (like nomisma.org/id/athens) instead of strings of characters (like ‘Athens’) to indicate the mint, allows computers to navigate to a resource and discover more information about the concept in question.  In this case, at nomisma.org/id/athens, can be found the co-ordinates of the city, its name in multiple languages, and links in the form of more URIs to other resources that give yet more information about Athens. By using a URI for ‘Athens’ rather than the string of characters, we have made it possible for machines to navigate from our object to meaningful statements about the place where it was produced.  We have inserted our coin into a graph of Linked Data.  In this way, one specific coin in one collection (numismatics.org/collection/1968.34.40) may be linked to a whole graph of data about the ancient city of Athens.

The question is raised, however, who should create the URIs we use to describe numismatic material?  The answer comes in multiple forms, depending on the type of concept we wish to express:

However, the only people who can reliably supply URIs for specifically numismatic concepts are numismatists themselves. Concepts such as ‘mint’, ‘die-axis’ or ‘issued by’ are common and potentially unique to our field, and we must define them.  It was for this reason that nomisma.org was established, to provide URIs for numismatic concepts, and to facilitate the creation of fully useful RDF triples for numismatic statements.

Nomisma.org URIs are now used by many of the major online projects to catalogue Roman Republican and Imperial coins, Roman Republican coin hoards, major coin finds databases across Europe, and collection catalogues in the US and Europe. Nomisma.org also underlies the first major Greek corpus to go online in Germany, and will underly the Inventory of Greek Coin Hoards and, ultimately the Corpus of Greek Coinage.  To date, more than 5,000 URIs have been minted by the project.

But what does this mean for me?

We are all, of course, free to embrace or ignore the opportunities of the Semantic Web and the new LANDscape of numismatics.  But to become involved is to find wider audiences for one's work, to contribute to a growing pool of connected data on the web, but also, crucially, to be able to harness the work of others for one's own benefit.

It should be stressed that to become involved in the LANDscape does not necessarily mean abandoning one's existing work habits or environment. Printed books and articles on the one hand, and the Semantic Web on the other, are just different forms of output for the same research processes. However, a few simple additions or modifications to your data can make your work much more accessible and useable.

At a basic level, consider using nomisma.org URIs as names for things, or at least referring to them alongside your own preferred terms in your raw data. If you are publishing to the web as a simple database, the same applies. But if you are tempted to start a project that fully embraces this approach, seek some professional IT support, and tell them that you want to publish RDF in a Triple Store with a SPARQL endpoint. You will raise eyebrows, garner interest, and open up new possibilities of funding.

For more practical guidance for Greek coinage, take a look at our Cookbooks.